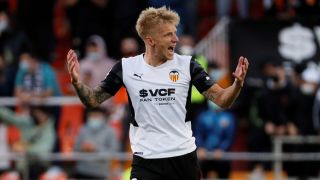 Atletico Madrid are on the verge of signing Daniel Wass from Valencia according to a report by Marca.

The deal is understood to be for a fixed fee of €2.7m with variables included on top of that. Final talks between the two clubs took place today and Wass himself is pushing for the move.

Wass’ contract with Valencia expires in the summer and so Valencia are cashing in on him now rather than lose him for nothing come the end of the season.

Between the wages saved by his departure and the transfer fee they’ll earn, Valencia estimate that the operation is worth about €4m to them all things said and done.

Atletico needed a versatile player capable of playing at right-back given they lost Kieran Trippier to Newcastle United earlier in the window. The 32-year-old Wass is delighted with the opportunity and arrives at Atletico with bags of experience.