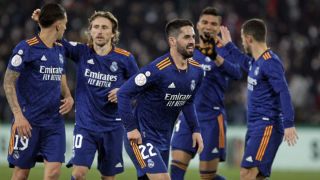 Real Madrid are negotiating with the RFEF to postpone their Copa del Rey quarter-final due to the absence of Casemiro, Eder Militao, Vinicius Junior, Rodrygo Goes and Fede Valverde according to Diario AS.

The five will be on international duty with Brazil and Uruguay respectively for the CONMEBOL qualifiers the same time their next Copa del Rey fixture is scheduled to take place.

Madrid expect a response from RFEF today and if it’s negative they’ll try to negotiate with CBF to release their Brazilian players as they’ve already qualified for the 2022 World Cup in Qatar and sit six points clear of second-placed Argentina in the table.

Uruguay still have a fight on their hands to make it to the Middle East, however, so releasing Valverde would be impossible.

The draw for the quarter-final of the Copa del Rey will take place this afternoon at Las Rozas. The RFEF are expected to make a decision after it’s made.