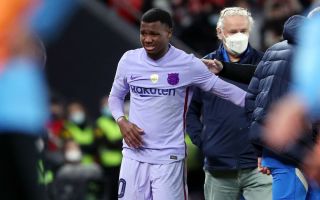 Barcelona had a difficult Thursday. They were knocked out of the Copa del Rey by Athletic Club and suffered two worrying injury blows as both Ansu Fati and Pedri left the field with complaints.

Fati fought for a ball with Inigo Martinez at the start of extra time only to feel a twinge in the back of his left thigh. The teenager couldn’t hide his tears as he left the field, embracing Xavi.

Barcelona have since announced, according to a report in Mundo Deportivo, that Fati has injured the femoral biceps of his left leg and must undergo more tests to know the extent of the injury.

It’s thought he could be out for up to two months, which is a real blow for Fati as a young man and for Barcelona as a club.

The fleet-footed forward is one of the most exciting talents in European football but his career has been blighted with injury.