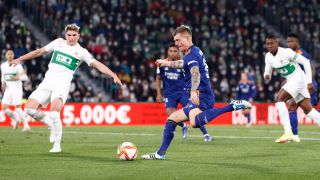 Real Madrid came from a goal down to beat Elche 2-1 in extra time at the Martinez Valero on Thursday evening. Los Blancos can now look forward to a place in the last eight of the Copa del Rey.

Elche took the lead in the 104th minute of the game. Gonzalo Verdu scored directly from a free-kick just after Marcelo had been sent off. Madrid equalised three minutes into the second-half of extra-time, however, through substitute Isco. The much-maligned Eden Hazard, also a substitute, then stepped up to score the winner in the 116th minute to save Madrid’s blushes.

Madrid will face either Mallorca, Cadiz, Rayo Vallecano, Valencia, Real Betis or Real Sociedad – as well as the winners of tonight’s clash between Athletic Club and Barcelona – in the quarter-final. Barcelona won last season’s edition, beating Athletic in the final at La Cartuja thanks to a brace from the great Lionel Messi.