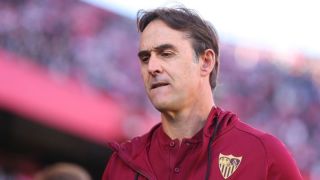 Sevilla will look to shrug off the disappointment of the weekend tomorrow when they lock horns with Valencia in La Liga at Mestalla. The Andalusian outfit just suffered defeat to Real Betis in the last 16 of the Copa del Rey in dramatic circumstances.

The match kicked off on Saturday evening but didn’t end until Sunday afternoon. A missile was launched at Joan Jordan in the 39th minute of the match with the score at 1-1, leading to the game being suspended. It didn’t resume until the following afternoon behind closed doors at the Benito Villamarin and eventually finished 2-1 to Betis.

But Julen Lopetegui is looking ahead, not over his shoulder. Sevilla don’t have the Copa to play for any more but they are still in the fight for La Liga as well as still alive in the Europa League. The Andalusian outfit are second in the league table, five points behind Real Madrid with a game in hand. Valencia are tenth.

“We’re on the eve of a complicated, difficult and demanding match against a great rival in Valencia at their stadium,” Julen Lopetegui said pre-match in comments carried by Marca. “It’s a match that requires all our energy and enthusiasm in the most important competition there is, La Liga. We have to focus 100%. We’re thinking about tomorrow’s game. We have too many beautiful things ahead of us to look behind.

“[A lack of rest] are the circumstances of the competitions, with intensity, demand and difficulties. We’ve had them in many ways through injury, covid-19, absences. We have them again in this game and if the team has shown anything it’s that they can compete amidst difficulty and we’ll continue to do so. We have to be able to overcome adversity against a powerful rival. Valencia are very clear about how to attack and how to defend, and they have excellent players as well as a coach who’s very clear about what he wants [from his team]. We’re going to have to do our best to try and beat them.”