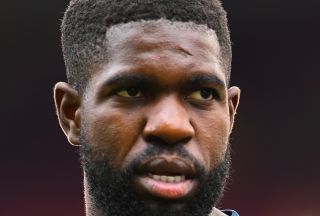 Samuel Umtiti is said to want a loan move away from Barcelona just days after signing a new contract.

The centre-back signed a new long-term deal with Barca earlier this week, extending his stay at the club until 2026.

Though, the motives behind the deal weren’t quite what they would usually be when it comes to new contracts.

Umtiti’s deal was to ensure Barca could register new signing Ferran Torres, the defender agreeing to spread out his payments over a larger term while taking a pay cut for the future.

Still, for Umtiti himself, it means he gets his wish of having the opportunity to prove he can have a future at Camp Nou having struggled with injury over recent seasons.

Though, minutes on the pitch are important for that, and so far this season, he has only been given 90 minutes of action.

With that in mind, it’s reported by RMC via Sport that Umtiti wants to secure a loan move during this transfer window.

It’s reported the Frenchman wants to get regular minutes to show what he can offer Xavi Hernandez and Barca going forward.

And that might just be a smart move given he is unlikely to get much time to show what he can do on the pitch at Camp Nou between now and the end of the current campaign.