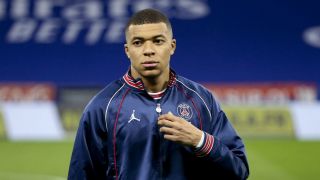 Kylian Mbappe’s future has been a topic of much debate for some time now. The Frenchman is expected to leave Paris Saint-Germain when his contract at the Parc des Princes expires at the end of this season, and Real Madrid appear to be in pole position.

Despite this, Mbappe is still totally focused on performing for his current employers and has become PSG’s most important player this season despite the presence of both Neymar and Lionel Messi. He’s contributed 18 goals and 15 assists for the club in the 26 games he’s played for them across Ligue 1, the Champions League and the Coupe de France.

These past few days, however, has seen a couple of unfortunate incidents affect the 23-year-old, note Diario AS. The first occurred on Twitter, when a young girl who suffers from a rare disease took to social media to ask Mbappe if he’d stay at PSG next season.

She then received a wave of abuse for doing so, prompting Mbappe to respond. “I also wish you a happy New Year, my little Camille,” he wrote. “Keep fighting like you’re doing, you’re giving us all a life lesson. The aggression in the comments for a child… We really are hitting rock bottom.”

The other incident occurred in Bondy, the neighbourhood in Paris where Mbappe grew up. Graffiti was etched on the mural dedicated to him there saying: “Mbappe, you’re dead.” It’s understood this emerged in a political context after one of Bondy’s mayoral candidates used Mbappe’s image in his campaign for the elections set to take place at the end of January.