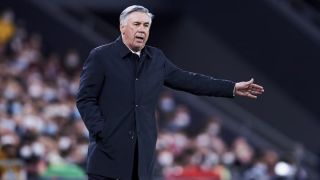 Real Madrid are preparing to take on Barca in the Spanish Super Cup semi-finals in Riyadh, Saudi Arabia.

Los Blancos will have the chance to reach Sunday’s final with Atletico Madrid and Athletic Club.

Fierce rivals Barcelona stand in their way, and Real Madrid have already defeated the Blaugrana this season.

But Xavi Hernandez has taken over since, so Barca could be a different prospect for Real Madrid this time around.

Ancelotti is likely to put out his strongest possible team for the Super Cup Clásico, though it seems he is not sure of who he is going to start just yet.

The Italian boss has been rather rigid in his team selection so far this season, but there could be a change or two in the air, with one of them potentially forced.

“I have some doubts…Carvajal is one,” Ancelotti said, as cited by Sport. “He has returned from injury and we have to evaluate.

“I have fresh players that can play as a right winger. I think that the eve of the game will be as always against Barcelona, a little worry, excitement and desire.