Atletico Madrid’s push to force their way back into the Champions League places has been dented by a 2-2 draw at Villarreal.

Diego Simeone’s defending champions edged back into the Top Four with a point this weekend but the visitors will be frustrated by the final result.

Los Rojiblancos flew into action at the Estadio de la Ceramica with Angel Correa hammering home a spectacular opener from the half way line.

Angel Correa scores from just past the halfway line! 🔥 pic.twitter.com/Or6Mb6Yd1w

However, the Yellow Submarine launched an instant response, as Gerard Moreno’s spot kick was saved and Dani Parejo’s successful follow up was ruled out by VAR.

But that setback could not stop Unai Emery’s side before the break as Pau Torres poked from Parejo’s free kick.

End to end action so far in this game! 🔥 pic.twitter.com/CTHg30QCrj

That impetus carried Villarreal into the second period as Alberto Moreno slid them in front before Geoffrey Kondogbia’s deflected effort got Atletico back level.

However, any chance of a late comeback for Simeone’s charges was ended by Kondogbia’s late sending off for a second booking in added time.

Atletico now head off to Saudi Arabia to face Athletic Club in the Spanish Super Cup with Villarreal away at Elche next weekend. 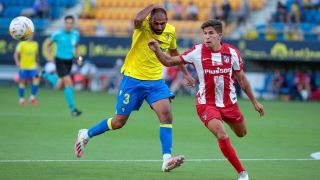