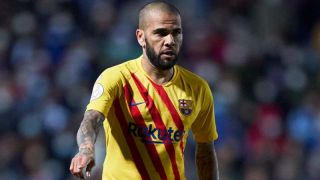 Barcelona name starting lineup for this evening’s clash with Granada

Barcelona travel to Andalusia this evening to lock horns with Granada in La Liga. The Blaugrana could end the day third should results go their way, so will be determined to secure the win.

Granada are down in 13th, and will be keen to put up a good showing to ensure they don’t get sucked into the dogfight to avoid relegation. The reverse fixture between the two sides – at Camp Nou in August – ended all square at 1-1.

Barcelona will hope to win the game to set themselves up well for their Supercopa de Espana clash with Real Madrid on Wednesday.

Barcelona are expected to set up in a 4-3-3, with Marc-Andre ter Stegen starting in goal behind a back four of Dani Alves, Gerard Pique, Eric Garcia and Jordi Alba.

Sergio Busquets will anchor the midfield, with Gavi and Nico Gonzalez either side of him. Luuk de Jong will lead the line, flanked by Ousmane Dembele and Ferran Jutgla.