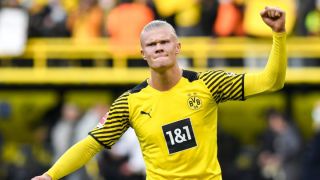 Haaland has rejected the possibility of joining Barcelona, Manchester City and Manchester United to play at the Santiago Bernabeu. He wants to follow in the footsteps of Cristiano Ronaldo, his idol, and play a key role in Los Blancos’ future.

The Norwegian is one of the hottest prospects currently on the market. It’s thought a €75m informal release clause will come into play at the end of this season and practically every elite club in Europe will like to sign him.

But only one can, and Madrid appear to hold the edge. They want to pair Haaland with Kylian Mbappe, who they hope to sign from Paris Saint-Germain, and create a truly devastating front line that will strike fear into the heart of every defence in the game.