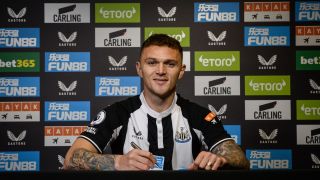 Newcastle United have confirmed the signing of Kieran Trippier from Atletico Madrid in an official club statement.

“I’m delighted to be joining this fantastic club,” Trippier said. “I really enjoyed my time in Madrid, but when I became aware of interest from Newcastle United, and having worked with Eddie Howe before, I knew this was where I wanted to be.

“I’m aware there’s a lot of work ahead of us but I know the demands of the Premier League well and I know what an amazing club this is with talented players. I can’t wait to get started and I’m excited to step out at St. James’ Park as a Newcastle player.”

Trippier previously worked with Howe at Burnley, and he’ll need to hit the ground running to help Newcastle overtake his hometown club. They’re currently level on points with Burnley and second-from-bottom, two points off Watford and safety from relegation.

Conversely, Trippier’s departure is a real loss for Diego Simeone and Atletico. They would have rather have kept him, but the Englishman’s desire to return home after his stint in Spain was too strong. They’re going to go to the market to replace him.

And they need reinforcements. Atletico are fourth in La Liga as things stand, a point clear of fifth-placed Barcelona but a whopping 14 behind league leaders Madrid. It looks unlikely that they’re going to retain their crown this season.