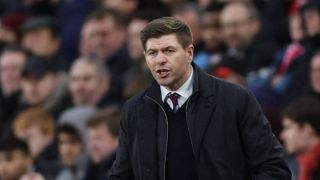 Aston Villa coach Steven Gerrard has refused to be drawn on whether his club are about to make a move to sign Philippe Coutinho from Barcelona in comments carried by Diario AS.

Villa have been tipped as the side best-placed to sign the Brazilian, who Barcelona are keen to move on. He himself is also keen to move on as he wants playing time ahead of the 2022 World Cup in Qatar – it’s going to be tough for him to make it into Tite’s stacked Brazil squad given his recent form.

Going to a club like Villa, who can afford to make him the fulcrum of their attack, is appealing. As is working with Gerrard – the pair were team-mates during Coutinho’s time at Liverpool.

“They don’t nickname you the magician for nothing,” Gerrard said when asked about Coutinho. “He’s been capped by Brazil 63 times and he’s a natural winner. He was incredible at Liverpool, so I can understand why he’s been linked with so many clubs.

“He’s someone I respect a lot. When there’s something concrete, our fans will be the first to know. But I don’t want to get into speculation because he’s a Barcelona player.”

Villa currently sit 13th in the Premier League table, eleven points clear of the relegation zone and eleven off the top six. Gerrard took over at Villa Park mid-season from Dean Smith.

Barcelona want to move on Coutinho to free up the financial space to register Ferran Torres, who they’ve just signed from Manchester City. Coutinho joined Barcelona in January 2018 from Liverpool but has failed to replicate the form that earned him the move.