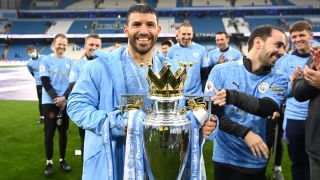 Sergio Aguero will always be associated with Manchester City. The Argentine marksman scored 260 goals for the club and won five Premier League titles, becoming the top scorer in their history.

He left the Etihad Stadium in the summer to join Barcelona, but his stint at Camp Nou ended prematurely due to arrhythmia. He was forced to retire having scored just one goal for the Blaugrana, a consolation in a defeat to Real Madrid in October.

But City have a plan for his immediate future according to a report in Diario AS. They’ve made an offer to him to return to the club as an ambassador. Mike Summerbee, another former player who won the league with City back in 1968, currently holds the role.

It’s yet to be known whether Aguero will supplant Summerbee or work in a complementary position, like Joleon Lescott, Shaun Wright-Phillips and Micah Richards currently do. It’ll be decided when the 33-year-old returns from his vacation in Uruguay.