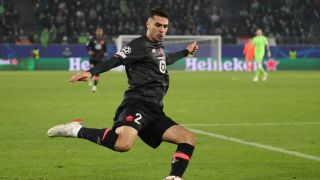 Atletico Madrid have been tipped to move for Lille right-back Mehmet Zeki Celik to replace Newcastle United-bound Kieran Trippier according to a report in Diario AS.

Trippier is expected to complete his return to the Premier League in the coming hours, and Diego Simeone has made it clear that he needs another right-back.

Celik is a leading candidate alongside Nelson Semedo and Pedro Porro. Celik has been tracked by Sevilla sporting director Monchi in recent months, and is understood to be open to a move to the Wanda Metropolitano. An offer is yet to be submitted, however.

The Turkish international has one year left on his contract with the French club. He’s played 21 games for Lille this season and scored once. It’s expected he could be gotten for about €10m.

Lille signed Celik from Bursaspor in the Turkish Second Division back in 2018, and he’s developed to become one of the finest right-backs in France as well as a Turkish international.