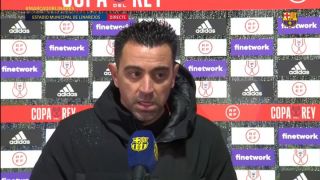 “It’s an important victory that means we pass to the second round,” Xavi said post-match in comments carried by Marca.

“It was difficult for us to understand how to dominate midfield and find the final pass, which is where our talent should shine. In the second half we were better.

“But it was a tight game and nothing was easy. This victory is one more step. At half-time, I told them it was going to be a victory of faith, of believing, of taking advantage of opportunities. We made it through and I’m happy.”