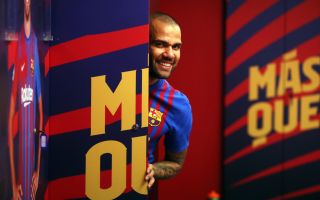 Dani Alves will make his second Barcelona debut this evening in the Copa del Rey as the Blaugrana travel to face Linares. Xavi has named him in a much-changed starting lineup.

Neto will start in goal behind a back three of Oscar Mingueza, Ronald Araujo and Eric Garcia. Alves and Jordi Alba will operate as wing-backs, while Sergio Busquets will anchor midfield with Riqui Puig and Nico Gonzalez either side of him. Ferran Jutgla and Ilias Akhomach will be charged with leading the line.

Barcelona will take the Copa seriously this season – it’s one of their only means of winning a trophy. They’re the current holders, but are obviously without Lionel Messi. The Argentine scored a brace as Barcelona beat Athletic Club 4-0 in last season’s final.

Linares edged past Gimnastic 6-5 on penalties in the first round of the Copa after the match finished scoreless after extra time. They then knocked out Alaves in the second round, winning 2-1. This is Barcelona’s first match of this season’s Copa – they were catapulted to this round due to their involvement in the Supercopa de Espana.