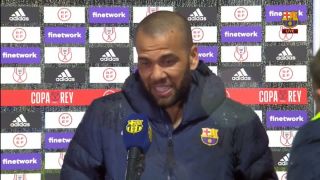 Dani Alves, who made his second debut for Barcelona on the night, was elated to be back in action after the game. “Xavi put together a system where I could get on the ball more and control the play,” he said in comments carried by DAZN and Marca.

“I played between the middle and the wide positions, filling spaces. It’s a position I can dominate, especially when I have players of quality beside me making things easier.

“It was a special day for everything that happened. To come back, to relive moments in La Liga and the Copa. It’s been magical, and we’ve made a great effort. We must learn to compete and fight until the last moment – it’s only those who fight who win.”