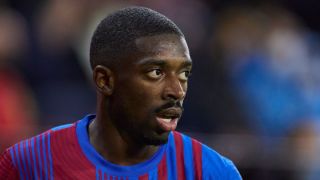 Paris Saint-Germain are said to be serious about pulling off a deal for Barcelona star Ousmane Dembélé.

Dembélé faces an uncertain future as things stand, with his Barcelona contract set to expire at the end of this season.

But an agreement must be reached and soon, with Dembélé now able to sign a pre-contract agreement with any club ahead of the summer.

According to Mundo Deportivo, PSG are waiting in the wings in case no agreement can be reached with Barca.

In fact, they are said to be in constant contact with Dembélé’s representatives to monitor the situation and to get first refusal on the winger should he become available.

If a deal can’t be reached, Barca would prefer to sell Dembélé in January to free up salary space and to get some of their more than €100million investment back from 2017.