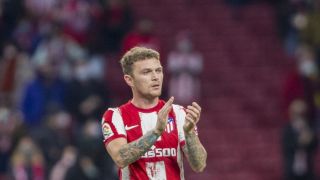 Kieran Trippier is set to leave Atletico Madrid for the Premier League and Newcastle United according to a report in Diario AS.

The Englishman leaves Atletico after two-and-a-half seasons at the Wanda Metropolitano, and has decided upon the move for family reasons rather than financial or sporting ambitions.

Trippier’s wife and two children returned to England this summer after two years in Spain, and the full-back wants to be with his family. He’s greatly enjoyed his spell in La Liga with Atletico.

The 31-year-old didn’t train this morning as the deal reaches its final stages, with an announcement imminent. Atletico have spent the last two weeks trying to convince him to stay but to no avail.

Trippier has contributed eleven assists to Atletico in the 86 games he played for them. The fee Newcastle are going to pay has not yet been revealed, but it’s expected to be under the €15m mark.

Atletico will now have to find a replacement for him. Cesar Azpilicueta’s name has been mentioned, but sporting director Andrea Berta is thought to have half a dozen players in mind.