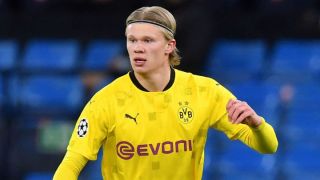 Barcelona president Joan Laporta has an agreement in place with super agent Mino Raiola to sign his client Erling Haaland in the summer of 2022 according to Deportes Cuatro and Diario AS.

The deal is dependent on Barcelona organising themselves financially in time for the deal to happen, but the most important element – convincing Raiola and Haaland – has been done.

Haaland – currently leading the line at Borussia Dortmund – is determined to be the undisputed leader of whatever project he joins, and that’s something Barcelona can offer him.

Real Madrid, a key rival for his signature, can’t. Karim Benzema and Vinicius are already at the Santiago Bernabeu, while Kylian Mbappe is expected to join them from Paris Saint-Germain soon.

Haaland will leave Dortmund at the end of this season due to an informal clause in his contract, and it’s expected that it’s going to cost whoever signs him in the region of €100m including all fees.

It’s thought that Haaland will sign a three-year-deal with the potential of a further two dependent on the completion of objectives and the intention of both parties. The Norwegian marksman will earn in the region of €30m gross per year.

In order to sign him, however, Barcelona are going to have to make some uncomfortable sacrifices. The likes of Frenkie de Jong, and Memphis Depay could depart – as could prized starlets like Pedri, Nico Gonzalez and Gavi – to facilitate the deal.