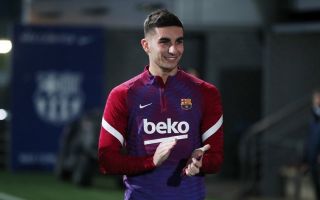 Torres completed a €55m move from Manchester City at the end of 2021 with the deal now ratified following the opening of the 2022 winter transfer window.

The Spanish international is not expected to be fit to make his first team bow until later this month as he continues his recovery from a broken foot.

However, despite a delay on his club debut, Xavi has been impressed by the 21-year-old, hinting at a key role for him in the coming weeks.

“Ferran Torres is a spectacular signing for us,” as per interview with Barca TV.

“He is very ambitious, dedicated and highly committed. You can see it in his eyes. His mentality is tremendous.”

❝@FerranTorres20 is very ambitious, dedicated and highly committed. You can see it in his eyes. His mentality is tremendous❞

Barcelona return to La Liga action this weekend with a trip to the Balearic Islands to face Mallorca tomorrow night.

However, the former midfielder is facing an ongoing injury crisis in Catalonia with potentially 15 first team players missing through either injury or a positive Covid-19 result.

La Liga have so far rejected Barcelona’s request to postpone the game with Xavi set to make wholesale changes to his starting line up in Palma.