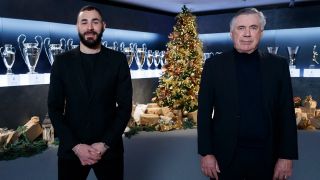 Football Espana wants to wish a Happy New Year to all of our readers. We’re going to take a short break on New Year’s Day before returning with renewed enthusiasm on January second.

It’s been an eventful year in the world of Spanish football. We saw two Copa del Rey finals in the space of a month – Real Sociedad beat Basque rivals Athletic Club in the delayed 2020 final before Barcelona beat Athletic in the 2021 edition.

The following month, Atletico Madrid won La Liga for the second time in the Diego Simeone era, beating out their great rivals Real Madrid on the final day of the season at Real Valladolid.

The summer was dominated by Lionel Messi. All signs pointed to the Argentine renewing his contract with Barcelona, only for the club’s financial situation to make this impossible. Messi left Camp Nou after 17 unforgettable seasons for Paris Saint-Germain.

But life goes on, and La Liga has been as unpredictable as ever so far in the 2021/22 season. Atletico and Barcelona are below-par, while Real Betis and Rayo Vallecano are flying high. But it’s Madrid who end the year at the top of the pile, eight points clear.