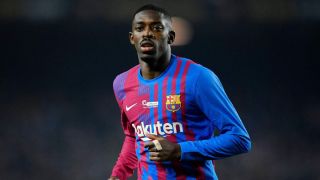 Barcelona announced Ferran Torres as their new signing this week but that coup has indirectly led to a problem according to Diario AS – Ousmane Dembele’s contract negotiations have stalled.

Dembele doesn’t understand why Barcelona are pleading poverty in their conversations with him but can find the money to go out and splash out on a major signing – he wants a signing-on bonus of €45m to renew his contract and an annual salary of €30m.

Barcelona won’t acquiesce to his demands, so the most likely scenario that’s emerged is the Frenchman leaving Catalonia on a free transfer when his contract expires at the end of the season.

But that isn’t the only option. Barcelona are considering every alternative, from forcing Dembele to spend the next six months sat in the stands to allowing him to leave for free in January rather than have him poison the team’s atmosphere.

But it’s unlikely he’d accept this option. The most likely scenario remains him leaving at the end of the season, with Juventus and Paris Saint-Germain apparently the two club’s best-placed.