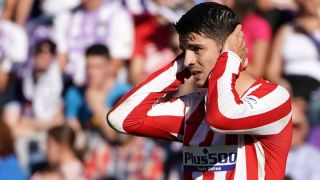 Atletico Madrid are paying close attention to the Alvaro Morata transfer saga according to a report in Diario AS.

Barcelona are keen to sign the Spanish forward, who’s currently out on loan in Italy with Juventus, to reinforce their attack.

Morata has no future at Atletico and nor do Atletico wish for the 29-year-old to return to the Wanda Metropolitano. The only reason he’s on loan at Juventus is because of market conditions.

The Italian giants have had Morata for 18 months, and there’s an option to buy included in the deal at the end of this season for a fee believed to be €35m. But Juventus now want Dusan Vlahovic.

Atletico would rather sell Morata to a club outside of La Liga – suitors in England, Germany and Italy have been mentioned – rather than strengthen a direct rival.

But the key to the transfer could be Antoine Griezmann. He’s is on loan at Atletico from Barcelona with an option to buy of about €40m – a direct trade of Morata for Griezmann makes sense.