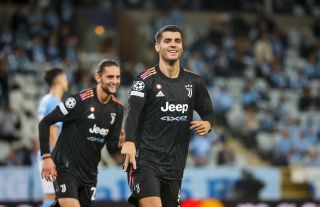 Barcelona have made a direct approach to Juventus to sign Alvaro Morata according to a report by Fabrizio Romano.

Xavi wants to bring the centre-forward to Camp Nou, but Juventus are said to be unconvinced about the prospect of including Memphis Depay as part of the deal.

An agreement must also be reached with Atletico Madrid, who are Morata’s parent club. But it’s thought they’re open to selling him.

Morata, 29, has played the majority of his football in Italy with Juventus across two spells. He’s provided the Turin club 54 goals and 33 assists in 160 appearances.

Born and raised in Madrid, the marksman has also enjoyed spells back home in Spain with both Atletico Madrid and Real Madrid, as well as in the Premier League with Chelsea.

He’s earned 50 caps with the Spanish national team and scored 23 goals. He was part of Luis Enrique’s team that made it to the semi-final of Euro 2020 this summer just gone.

Barcelona have directly approached Juventus for Álvaro Morata. Xavi wants him – again, Juve are not convinced about Depay as potential part of the deal. This is why is complicated. 🇳🇱🇪🇸 #FCB #Juve

Obviously, an agreement must be reached with Atletico too – they're open to sell.