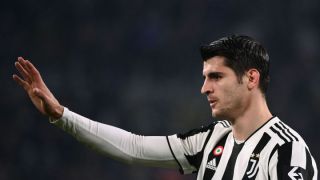 Xavi wants Alvaro Morata to be Barcelona’s number nine this season according to a report in Diario AS.

Negotiations with the Atletico Madrid player, on loan at Juventus, are said to be advanced with both the player and his agent, Juanma Lopez. But the deal is yet to be closed.

Xavi is the one who got the ball rolling by calling the marksman to  sound out his situation. It’s understood the Spaniard is unhappy at Juventus and would come to Barcelona with his eyes closed.

Xavi considers the 29-year-old one of the best strikers in the world, and sees his signing as a long-term move, not a stopgap.

Morata would have to lower his salary to fit Barcelona’s financial situation, but regarding their negotiation with Atletico they have an ace up their sleeve – Antoine Griezmann.

This means that the two clubs could come to an agreement that could make for a balanced operation in every sense of the word.