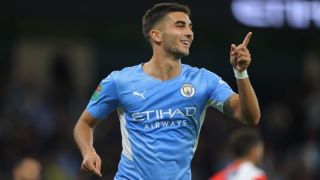 Ferran Torres left Valencia for Manchester City in the summer of 2020. It was a big risk – he’d become important at Valencia, and had to prove his worth all over again in the Premier League.

The youngster settled relatively quickly at the Etihad Stadium, but he did find it difficult to break into Pep Guardiola’s team and start on a regular basis, note Diario AS.

Despite this, he scored 13 goals in his debut season at City, the most any player has scored during their debut season at the club since Guardiola took charge in the summer of 2016.

Sergio Aguero taught Ferran how to behave as a centre-forward, while Phil Foden used to go to training with him and he started doing a language exchange with Raheem Sterling.

Ferran won the Premier League and the League Cup in his first season with City, before proving himself one of Luis Enrique’s most important men for the Spanish national team at Euro 2020.

But he missed his family and friends living in England, and was unable to fully enjoy life in Manchester due to covid-19.

City pushed hard to sign Harry Kane in the summer, a signing that would have pushed Ferran further down the pecking order.

Ferran started the season well, but then suffered an injury when representing Spain during the Nations League in October.

That’s around the time Barcelona came on the scene. They could offer Ferran what City couldn’t – a prominent role in a growing team, back home in Spain no less. It was a seductive vision.