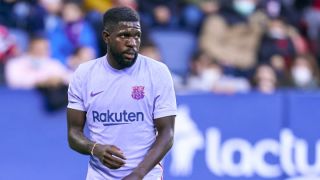 The situation Barcelona face with Samuel Umtiti is one of the most complicated to resolve in the club’s modern history according to a report in Diario Sport.

The French centre-back is determined to stay at Camp Nou and try to fight for his place in the first-team, an opinion that the powers-that-be at the club absolutely don’t share.

Barcelona aren’t short at centre-back, and Umtiti is pretty far to the back in Xavi’s pecking order. His preference is to play younger players like Ronald Araujo and Eric Garcia beside Gerard Pique, with Clement Lenglet as a fourth choice. Umtiti is fifth choice.

Umtiti is the Barcelona player to have played the fewest minutes this season, his sole appearance coming during a 2-2 draw with Osasuna at El Sadar in La Liga.

Due to this, the club are seriously considering taking the dramatic action of mutually terminating Umtiti’s contract, a deal that’s set to run until the summer of 2023.

This would be costly, of course, but it would lighten their wage bill and free up coveted space in the first-team squad. A meeting with his agent, Arturo Canales, will be held soon.