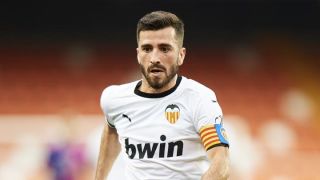 Barcelona are interested in signing Jose Gaya from Valencia

Barcelona are interested in signing Jose Gaya from Valencia according to a report in Mundo Deportivo.

The Blaugrana, who are keen to replace the ageing Jordi Alba at left-back, have told the 26-year-old Valencia captain that they want to sign him in the summer.

Gaya’s contract at Mestalla is set to expire in the summer of 2023, and so far he’s not accepted the offer Valencia have put on the table. It’s thought Barcelona could sign him for €20m.

Barcelona’s only backup for Alba at the time of writing is the 18-year-old Alejandro Balde, and Gaya knows Alba well due to their time together with the Spanish national team.

Luis Enrique has fielded both throughout his tenure of Spain, with neither exactly winning the race outright just yet. Given Gaya’s age, however, he’d be a logical successor to Alba at Barcelona.

A local boy having been born in Pedreguer, Gaya has spent the entirety of his football career at Valencia. He made his first-team debut just short of a decade ago, back in 2012.