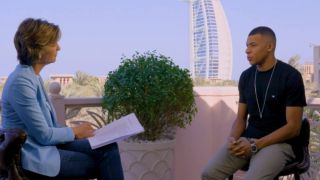 Kylian Mbappe has revealed that he won’t be leaving Paris Saint-Germain for Real Madrid this January transfer window.

The Frenchman has been heavily linked with a move to the Santiago Bernabeu for some time now, and openly admitted that he wanted to join the Spanish club last summer.

Madrid pushed hard to sign him, but PSG held firm. Things will be different this summer, however. Mbappe’s contract at the Parc des Princes will expire and he’ll officially become a free agent.

But Mbappe has made clear that is sole focus for the rest of the season is doing his very best for PSG. They’ve drawn Madrid in the last 16 of the Champions League, after all, in a tie that’s undoubtedly the pick of the round.

Not only is Sergio Ramos going to return to Spain for the first time since departing Madrid for PSG last summer, so is Lionel Messi. The Argentine joined PSG from Barcelona the same summer as Ramos.

But the big story of this fixture is Mbappe. Considered by many to be one of the greatest players in the European game, the 23-year-old marksman has an incredible future ahead of him. But where he’ll be playing his club football, at least, is up for debate.

“This isn’t the time to talk about my future because we’re in the most important phase of the season,” Mbappe said in an interview with CNN in Dubai as carried by Cope.

“We’re facing Madrid. That’s the only thing I have on my mind, is to beat Madrid in February and in March. We’re ready and I’m ready to play and give my all for PSG.

“We’ve made the final and the semi-final in last two years, but this year we want to win it. I’m not going to Madrid in January.”