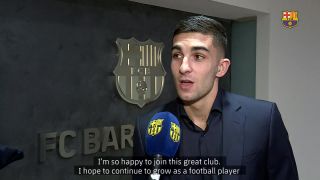 Barcelona confirmed that they signed Ferran Torres from Manchester City on Tuesday afternoon.

The Blaugrana have long been linked with the Spanish international, who’s been touted as one of the most exciting attacking players of his generation.

He joined City from Valencia in the summer of 2020, and while he performed well for Pep Guardiola in the Premier League he felt the time was right to return to Spain.

Barcelona are at a low ebb, far from the side they were a few years previous. But they’re still Barcelona, and will always attract ambitious young men keep to play a role in their revitalisation.

“I’m so happy to join this great club,” Ferran said to Barcelona’s media team after signing.

“I hope to continue to grow as a footballer and as a person while helping Barcelona to be who they are, one of the best clubs in the world. I’m very happy to be here.

“It’s a club that’s happy about my arrival and I’m looking forward to being with this team.”

Ferran is a dynamic player who can play across the front three, something that suits Barcelona down to the ground. The idea of him playing beside Ousmane Dembele and Ansu Fati is exciting.

Still just 21, Ferran has established himself as an important player for Luis Enrique’s Spanish national team and has scored 12 goals in the 22 caps he’s so far earned for his country.