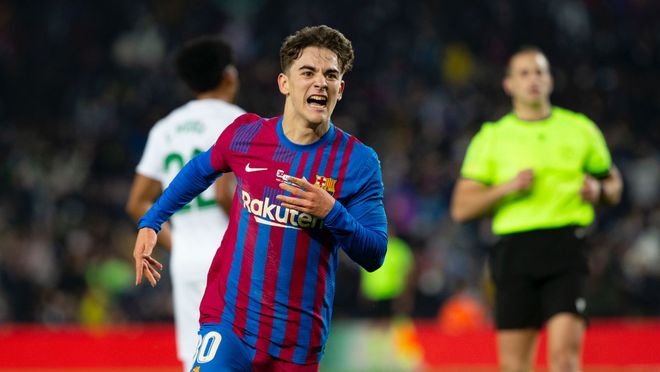 Barcelona starlet Gavi: “For me, playing at Camp Nou was a dream and I’ve made it come true”

Gavi has been Barcelona’s standout performer in a difficult season. The 17-year-old broke into the Blaugrana’s first team at the beginning of the season and hasn’t looked out of place, even earning a call-up to Luis Enrique’s Spanish national team.

On Thursday, according to Diario Sport, Gavi was awarded an award recognising his achievements in Los Palacios y Villafranca, his hometown in the southern province of Seville. After receiving the award, the midfielder spoke about his journey.

“I’ve always been Barcelona, since I was little,” he said. “I was clear that I wanted to play there. For me, playing at Camp Nou was a dream and I’ve made it come true. I dedicate this award to my family, my friends and everyone from the town I know.”

An intelligent, fearless and creative midfielder, Gavi is of a unique profile. Despite his diminutive stature and tender years, he has no problem doing battle with much larger and older adversaries. Capable and competent on the ball, he’s drawn attention for both his ability with it and his work off it. He’s truly a special talent.

Gavi has now made four appearances for Spain, as well as 21 for Barcelona’s first team – 15 in La Liga and six in the Champions League. He’s contributed one goal and three assists, and wears the number 30 for the Blaugrana – Lionel Messi’s old number.