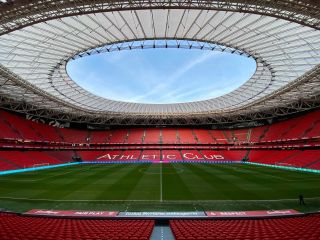 Real Madrid travel to San Mames to lock horns with Athletic Club this evening in La Liga. Los Blancos will be keen to end their year in style despite the covid-19 outbreak that’s dominated their preparation for the fixture. They’re top of La Liga right now.

And due to Sevilla’s failure to beat Barcelona at the Sanchez-Pizjuan last night, they’ll stay there for a while yet. If they beat Los Leones tonight they’ll end 2021 with an eight-point lead over Sevilla, who’ve emerged as their only serious challengers at this point in the fight. Athletic are on a high having beaten high-flying Real Betis 3-2 in Bilbao last weekend. They’ll fancy themselves.

Carlo Ancelotti has made several covid-19-enforced chances to his team but has still set up in a 4-3-3. Thibaut Courtois starts in goal behind a back four of Lucas Vazquez, Eder Militao, Nacho and Ferland Mendy. Fede Valverde, Eduardo Camavinga and Toni Kroos will run the midfield, while captain Karim Benzema will lead the line flanked by Vinicius and Eden Hazard.