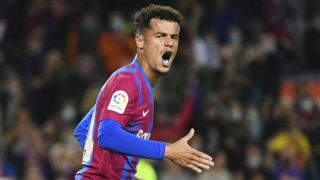 One of the players Xavi has decided won’t be part of his Barcelona is Philippe Coutinho. The Brazilian has failed to impress at Camp Nou since he joined from Liverpool in January 2018 as the most expensive signing in the club’s history, and earns a salary in the region of €22m per season despite contributing little.

Barcelona are desperate to move on the Brazilian, and it’s a return to the Premier League that seems to be his likeliest destination. But not just to Liverpool – Newcastle and Everton have emerged as potential suitors according to Mundo Deportivo and Diario AS.

The appointment of Rafa Benitez shows that the powers-that-be at Everton don’t care about hiring individuals with a past at their great rivals Liverpool, and their current sporting situation means that they have to take gambles on players at a low ebb.

And Coutinho is most certainly at a low ebb. He spent all of last season at Barcelona under Ronald Koeman, but failed to perform with any kind of consistency. He’s accumulated 608 minutes across 16 matches this season under both Koeman and Xavi, but is consistently being overlooked in favour of unproven teenagers. His days at Camp Nou appear to be numbered.