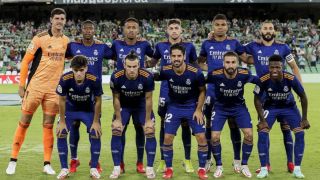 Real Madrid face Athletic Club tomorrow evening at San Mames. It’s their last game of 2021, but they’ll be without David Alaba according to a report in Diario AS – the Austrian defender tested positive for covid-19 in a PCR test taken on Tuesday morning and will isolate for the next ten days from home.

He’s not the only one who’ll miss the game through covid-19. Luka Modric, Marcelo, Adriy Lunin, Gareth Bale, Marco Asensio, Rodrygo and Isco have all tested positive in recent days, as has Carlo Ancelotti’s son and assistant coach Davide Ancelotti.

Los Blancos will also be without Dani Ceballos (he’s returning from injury), Dani Carvajal (he’s injured) and Casemiro (he’s suspended). Alaba is a huge loss – since making his debut, the only game he’s missed has been against Espanyol.

And Madrid need to win. Sevilla are playing Barcelona at the Sanchez-Pizjuan this evening, and if they win they move to within just three points of Los Blancos at the top of the table. Athletic are also coming into the game on the back of an impressive victory over Real Betis last weekend – it won’t be a cake walk.