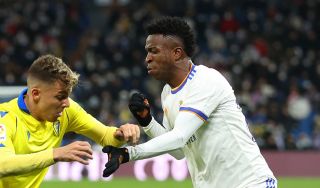 Carlo Ancelotti has dismissed talk of tiredness for Vinicius Junior.

Vinicius has been key for Real Madrid this season, scoring 12 and assisting nine so far this term.

Given his fine form, the winger has been one of the undroppable players under Ancelotti, and that is represented by his 21 consecutive starts across all competitions.

The 21-year-old is being asked to produce performances game after game, and that is especially the case at the moment, with Real Madrid without coronavirus-related absentees Marco Asensio, Rodrygo, Gareth Bale and others.

After playing in the frustrating draw with Cadiz on Sunday, Vinicius will start again on Wednesday as Real Madrid face Athletic Club in their final game before Christmas.

And when asked about the Brazilian’s fitness levels ahead of the game, Ancelotti simply said: “He is not tired. He is physically well.

“He is motivated and he is excited. He is important for us.”

Thankfully for Vinicius, Real Madrid will give players seven days off after Wednesday night’s game, with La Liga taking a break until the turn of the year.

That will give the winger a chance to put his feet up and rest ahead of what will be a busy second half of the year.