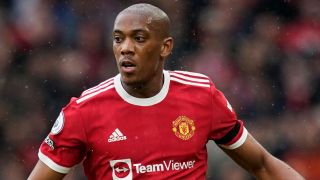 Anthony Martial’s preference is to join Sevilla if he’s to leave Manchester United in the January transfer window according to a report in Sky Sports News.

Barcelona and Juventus have also been credited with interest in the French forward, but it’s at Sevilla where he’s said to believe he has the best chance at getting his career back on track.

And Sevilla could use him. The Andalusian side are in the midst of a genuine title challenge – if they beat Barcelona this evening they’ll move to within just three points of La Liga leaders Real Madrid. They’re missing a bonafide goalscorer, however. Youssef En-Nesyri is injured and things haven’t quite clicked with Rafa Mir.

Martial is now 26, a pivotal time in a footballer’s career. He’s contributed 79 goals and 50 assists for United in the 268 games he’s played for the club, but has scored just one goal in ten appearances across all competitions so far in 2021/22.

The Frenchman is set to hold talks with Ralf Rangnick in the coming days over the role he’ll play at Old Trafford under the newly-appointed German. If both parties agree a move is the best option for him, it’s the Sanchez-Pizjuan that’s firmly in his sights.