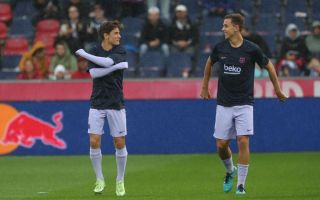 “La Masia is rescuing Barcelona in their greatest time of need,” is a line which has gone around a lot following Barcelona’s victory over Elche at Camp Nou yesterday evening, with goals from Ferran Jutgla, Gavi and Nico.

It’s almost enough to convince you that Barcelona’s young talents are a golden generation of homegrown prodigies who are playing for their boyhood clubs having grown up in the shadows of Camp Nou. That fantasy could barely be further from the truth.

Unlike Xavi and Gerard Pique and others of their generation, these talents aren’t homegrown from scratch. There are few true canteranos in this Barcelona side, even though it is packed full of young talents.

Gavi and Nico both joined aged 11, with Gavi at Real Betis until 2015 and Nico at Montaneros until 2013. Others have barely been at the club for more than a few months. Ez Abde was with Hercules in Segunda B last season and signed for Barcelona at the age of 19 this summer. 22-year-old Jutgla was with Espanyol until July. Ronald Araujo joined at the age of 19 in 2018.

In fact, the closest to a true La Masia product might even be Eric Garcia, who returned this summer after four years at Manchester City. His move away was fuelled by doubts about whether he could progress at Barcelona. Having seen the likes of Dani Olmo move abroad and become a success, he followed in their footsteps only to return years later, just like Pique did.

It’s true that this is nothing new. Andres Iniesta, one of the club’s greatest icons, joined aged 12 from Albacete before going on to have a magnificent career. Lionel Messi is another fine example. None of this is to take away from the incredible evolution of young talent, but this is not a new generation of Xavis or Piques.

Once again, finances have a say. The ability to persuade 11-year-old Gavi to up sticks and move a 10-hour drive away would have been impeded without the club’s financial might and infrastructure. Jutgla was Espanyol B’s captain and greatest hope until he left them to take more money at Barcelona.

Barcelona are doing a superb job of developing many of these players. Many would argue that if finances didn’t dictate that they had no alternative, they might not be getting the first team opportunities that they are today. Previous regimes have gambled on multi-million euro transfer deals rather than afford opportunities to youngsters, but Joan Laporta and Xavi have little choice but to go with them.

Xavi’s bravery in fielding so many – and unlike his predecessor not openly criticising them in the press – must be commended. The performances of the youngsters even more so, given how they are stepping up to the plate while the veterans of the side continue to disappoint. But this is not quite the humble fairytale that some in the Catalan media may like to paint it out to be.