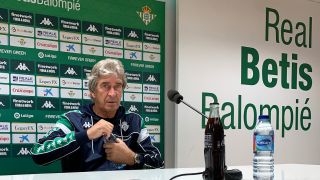 Real Betis travel up from Andalusia to the Basque Country tomorrow afternoon to lock horns with Athletic Club in La Liga. Los Verdiblancos are flying this season, and have a real shot at qualifying for next season’s Champions League as things stand. Manuel Pellegrini has built a competitive, talented team.

Betis are third in La Liga, a point behind city rivals Sevilla and nine off pace-setters Real Madrid. Breathing down their necks, however, are Rayo Vallecano, Atletico Madrid and Real Sociedad. They’ll be keen to keep their good form up, and Athletic are no easy opponent, especially at San Mames.

Marcelino has built a difficult-to-beat team in Bilbao, although they are struggling to convert their chances. They’re eleventh in La Liga, eight points off the top six and eight off the relegation zone. Last weekend they lost 1-0 to Sevilla at San Mames despite dominating the fixture across 90 minutes – they’ll be hoping to send Betis back to the Andalusian capital empty-handed.

“In football each game is different,” Pellegrini said in his pre-match press conference in comments carried by Marca. “We’re going to go there to play our game in the best possible way, to try and make as few mistakes as possible and get the best result. The decisive thing is going to be individual performances and how the team does in the game.