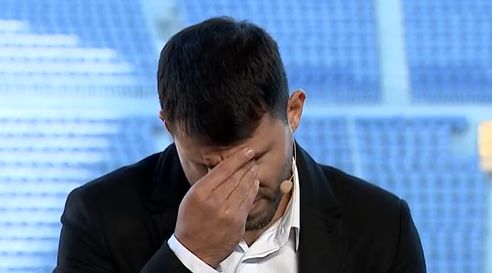 Sergio Aguero has said a tearful goodbye to his professional football career at the age of 33.

After a hugely successful career, the Argentine striker has decided to walk away from the game due to a health issue.

Aguero suffered chest pains during a game around a month and half ago and it has since been confirmed that he cannot continue playing.

Having had such a successful career to date, winning the Europa League with Atletico Madrid before becoming a club legend with Manchester City, winning several league titles and becoming the fourth highest scorer in Premier League history, the striker has decided it is best to put his health first.

Given he only joined Barcelona in the summer, on the back of a Copa América-winning campaign with Argentina, it’s clear the veteran frontman still had objectives left to achieve in the game.

That was evident from his hugely emotional state as he took to the stage for his press conference on Wednesday.

But as he has said in his goodbye message, he has managed a hugely impressive career, the likes of which most players can only dream about, and with his health on the line, he has taken the brave choice to call it a day.

Below you can find Aguero’s full message from the press conference, which was streamed on Barca TV.

“This conference is to communicate that I have decided to stop playing football.

“It’s a very difficult moment, but the decision that I have made is for my health, that’s the main reason.

“It’s because of the problem that I had a month and a half ago. I was in the good hands of the medical staff, who have done their best, and they have told me that the best thing is to stop playing.

“Around 10 days ago I made that decision. I want to tell everyone that I did everything possible to have hope, but there wasn’t much hope.

“I am very happy with the career I’ve had. I always dreamt about playing football.

“My dream was to play in the Primera division, I never thought I would get to Europe.

“I want to thank everyone, to Atletico Madrid, who took a bet on me when I was 18 that I could do well in Europe.

“To those at Manchester City. You know how I feel about Manchester City – they looked after me very well, and to Barca – the team has been great to me, and without doubt, it’s one of the best teams int the world.

“I’m very grateful because they treated me well. And to the Argentina national team, who I love the most.

“I’m very grateful to those here, the people who worked with me. Also, to my teammates, most recently the ones at Barca.

“I think I always did my best to help them win. I also want to thank my teammates who helped to to grow. I leave now with my head held high.

“I don’t know what awaits me in my next life, but I know there are a lot of people who love me, and I am grateful, too, to all the press here. Most of them have treated me well, but no worries, it’s their job.

“I will always remember the amazing things, so thank you all.”