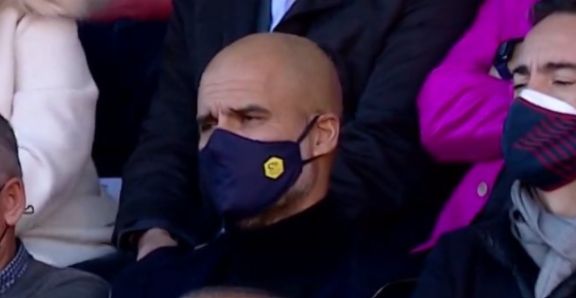 Pep Guardiola was among the many former colleagues of Sergio Aguero’s to make the trip to Barcelona for the striker’s farewell press conference.

After a successful career, Aguero announced his retirement from the game today at the age of 33 due to a heart problem.

The striker has been out of action for the last month and a half, and around 10 days ago, he made the decision, with the advice of Barcelona‘s medical staff, to retire due to an irregular heartbeat which would make it unsafe for him to continue.

Aguero made the decision official in a press conference today, saying a tearful goodbye to the game he loves after an excellent career, winning numerous titles from the Europa League to the Premier League, the FA Cup to the Copa América, and scoring hundreds of goals along the way.

And during his press conference, he was supported by a number of former and current colleagues.

A number of other former colleagues were also present, as were the whole Barcelona squad, who were present to support their teammate on a difficult day.

A nice touch from all who made the effort to be at Camp Nou for the emotional event, and you can see one of the photos below.