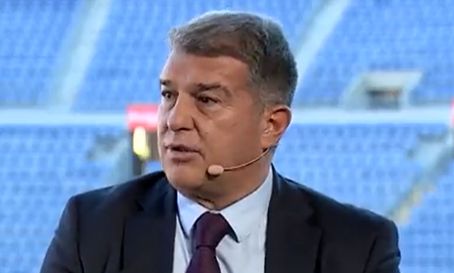 Barcelona president Joan Laporta has sent a message of support to Sergio Aguero following his retirement.

Aguero confirmed his retirement from football today, at the age of 33, due to a heart issue that has kept him out for the last month-and-a-half.

Tests over recent weeks have concluded that the safest option is for the Argentine to call it a day on his career, and he has followed that medical advice.

Aguero has achieved a large amount in the game, winning Copa America, a number of Premier League titles and the Europa League, among other honours, and during his Manchester City days, he became the fourth highest scorer in Premier League history.

Despite snapping Aguero up in the summer on a free transfer, Barcelona won’t get to see the best of the striker in a Blaugrana shirt.

Still, the club believe Aguero has done the best thing and president Laporta has vowed to support the Argentine as following his emotional retirement.

“We have kept hope at Barca but we think that he has taken the right decision,” said Laporta during today’s press conference.

“You have our support in everything relating to this issue.”

He added: “You have been a born goalscorer, recognised all over the world. You have done so much, not just in football, but also through your sympathy and the way you are.

“We would have liked it if you could have arrived earlier. When you played with Atletico, the Cules already envied you.

“Now, you collect the fruits of what you have sewn in this new chapter that starts now. We wish you the best.”

Kun, you’ll always have a home here at Barça pic.twitter.com/dVBT7plcWl