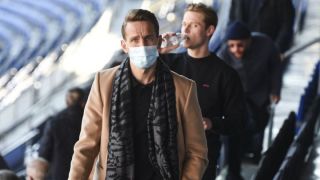 Luuk de Jong isn’t in Xavi’s plans at Barcelona according to a report in Diario AS. The Dutchman is on loan at Camp Nou from Sevilla, who don’t intend on recalling the striker from Catalonia. Therefore, Barcelona have been forced to examine several ways of getting him off their wage books this January.

Turkish outfit Fenerbahce hold an interest in his services and would consider signing him in January. Barcelona are open to the move, and Sevilla are too as it means he’d get more game time and put himself in the shop window ahead of the summer. He still has another year left on his contract at the Sanchez-Pizjuan.

De Jong has featured for 496 minutes this season with Barcelona and scored just a single goal. He was very much a Ronald Koeman man – his compatriot labelled him as being better than Neymar in the air. He has, however failed to impress with his incision in front of goal and doesn’t suit the profile of player Xavi wants.