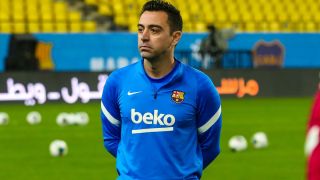 Boca Juniors beat Barcelona on penalties in the Maradona Cup at the King Saud University Stadium in Saudi Arabia on Tuesday. Ferran Jutgla fired the Blaugrana into a 52nd minute lead only for Boca to equalise through Exequiel Zeballos in the 77th.

Boca then won 4-2 in the penalty shoot-out to claim the first ever Maradona Cup. It’s an event held in honour of Diego Maradona, the legendary Argentine footballer who passed away this time last year. Maradona joined Barcelona from Boca in 1982, only to return to La Bombonera to finish his career in 1995.

The result is another defeat for Barcelona in a tough season. They were knocked out of the Champions League last week after finishing third in their group, and drew 2-2 at Osasuna at the weekend. They sit eighth in La Liga. Boca finished fourth in the second phase of Argentine Primera Division this season, 13 points behind champions – and their great rivals – River Plate.

Xavi was pleased to be able to hand Dani Alves his second debut for Barcelona. “Having Dani Alves back is very positive for the team,” he said as carried by Mundo Deportivo. “Everyone has seen that he’ll help us a lot. He’s a sensational player and will help us with team spirit, character and soul.”

Xavi was pleased with the run-out. “Those who’ve played less, like Neto and Riqui [Puig], have played at a very good level,” he said. “All the youngsters were good. They played with self-confidence, even though they played in different positions, like [Sergino] Dest. New positions and positive conclusions. Despite losing on penalties, we’re happy. It’s not important to lose on penalties, the important thing is to get in minutes.”