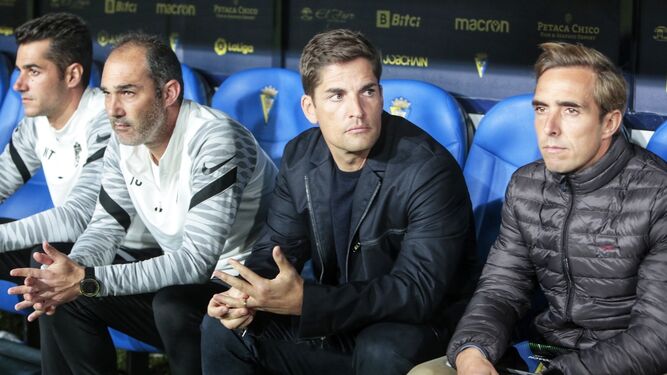 Robert Moreno has earned his shot at Granada

Winless after seven games. Only one clean sheet. Only five goals scored. Few would have been shocked had Granada cut their losses and dismissed coach Robert Moreno in late September. There was much talk that such a move would be the case.

But then something magical happened. Against the run of play, against the odds, against all of the statistics, Ruben Rochina fired in a rocket and Granada beat title hopefuls Sevilla. Then came a 90th minute equaliser at El Sadar. A 97th minute equaliser against Getafe. A 3-0 thrashing of Levante. Belief has returned to Nuevo Los Carmenes.

Moreno is a peculiar and, perhaps harshly, unpopular figure among Spanish footballing circles. “Unloyal, with excessive ambition,” was how Luis Enrique described him after a very public falling out after his return to the fold with the Spanish national team, taking back the job that he had left to Moreno.

This is a man who was working as a cashier at a bank until Luis Enrique offered him a position to go into data analysis at Celta Vigo, having offered his services to any and every lower league club that would listen.

At the age of 44 he has coached Spain, AS Monaco, and is now in his first La Liga job with Granada. It’s in this job, tasked with replacing Diego Martinez, that Moreno has faced yet another challenge. Replacing Luis Enrique with Spain, Leonardo Jardim at Monaco and now Martinez at Granada, he has never been afraid to fill some rather large shoes.

When he arrived in Andalusia, taking a team which had taken on Europe with its counter-attacking, defensive style, he knew that his style would be some change. His possession-based approach, more like that of Luis Enrique’s Barcelona, was immediately questioned. Undergoing such a change with the second oldest squad in La Liga was never going to be easy. There was a real lack of belief that the appointment would work out right from the off.

Fast forward to 13th December 2021, and Jorge Molina’s 89th minute equaliser in Cadiz, and belief is the one thing that Granada are not lacking. Having climbed out of the drop zone, Granada have left their late woes behind them. In the space of six games at the start of the season, Valencia, Real Betis, Barcelona, Real Sociedad and Celta Vigo all took points from Granada with goals in the final 10 minutes of action. Since then, Granada have turned the tables. Those late equalisers against Osasuna and Getafe have been followed up by a late winner against Alaves and an equaliser in Cadiz.

Belief and unity is what this team has become all about. At last, there is belief in Moreno. All of the late goals scored by Granada have been scored by substitutes that the coach has introduced, and that has helped him to gain credibility and establish himself. The players have bought into his idea.

No-one is getting carried away with Granada. Consistency has been an issue and performances have left much to be desired. After all, scrapping for late points is not being as convincing or comfortable as any fan would like. But Moreno has bought himself time to show that he can fit this team into his mould. Having led Spain for ten matches and Monaco for 13, he’s already at 18 with Granada and we are seeing the first signs of him finally having an opportunity to build a project. How that project develops will determine whether Moreno will become a recognised Primera coach, or will be discarded and forgotten as quickly as he appeared.