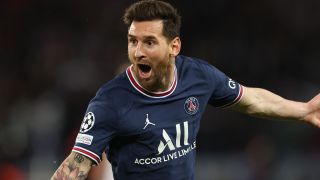 Real Madrid’s clash with Paris Saint-Germain is undoubtedly the standout fixture of the last 16 of the Champions League. It’s a tie with no shortage of storylines, chief among them the return of Lionel Messi to the Santiago Bernabeu.

Messi has, of course, faced Madrid many times over the years, often playing the role of their chief tormenter. The Argentine left Barcelona for PSG on a free transfer this summer, however, and this will be the first time he’s faced Los Blancos since.

He’ll also be joined by Sergio Ramos, a Madrid legend. Ramos and Messi are now teammates at the Parc des Princes, although it’s true that the Andalusian has struggled to keep fit so far in his PSG career. If he can get up to speed in time for the last 16, however, it’ll be intriguing to see him suit up against Madrid.

Messi, speaking in comments carried by Marca, has made it clear that PSG are keeping their eyes on the prize. Whoever they face on the path to achieving their ambition is incidental. “PSG’s goal is the Champions League,” the 34-year-old said. “It’s everyone’s goal. It’s a special competition for all the great teams.”

Messi also said that while adapting to life in Paris wasn’t easy, he feels well-settled in France now. “It was a very big change because we have been living in the same place for a long time, it wasn’t easy,” he admitted. “But now we’re very well in a spectacular city, playing for one of the best teams in the world. We’re very happy.”