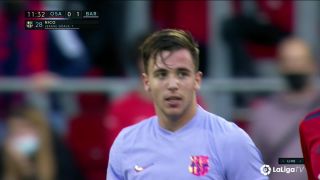 Barcelona took a 3-0 beating at the hands of Bayern Munich during the week to knock them out of the Champions League, and lost 1-0 to Real Betis last weekend. They’re eighth in La Liga, six points off the top four and 16 off Real Madrid in first place. Osasuna are eleventh, just two points behind Barcelona.

Barcelona took the lead in the 12th minute, two of the brightest prospects at the club combining to devastating effect. Gavi picked out Nico inside the penalty area with an incisive pass and the Galician finished coolly to make it 1-0.

A piece of magic from two of Barca's youngsters! 🔥

A spectacular pass from Gavi and Nico adds a beautiful finish to open the scoring 👏 pic.twitter.com/Fx2xWwEfEM