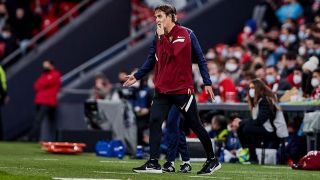 Julen Lopetegui: “Only we know the week that we’ve had”

Sevilla beat Athletic Club 1-0 at San Mames last night to keep the pressure on league leaders Real Madrid. It was an unusual game in that the hosts actually enjoyed the better of proceedings, but it was Sevilla that struck the killer blow in the 38th minute through Thomas Delaney. The Danish midfielder scored his first goal for his new club in spectacular style – left footed, top corner.

The result is a much-needed tonic for Sevilla after a difficult week. They lost 1-0 to Salzburg on Wednesday evening, thus failing to progress to the last 16 of the Champions League and instead being demoted to the Europa League. But their victory in Bilbao means they’re still in the title race – five points behind Madrid with the same number of games played, 16.

Julen Lopetegui rested several key men for the game, perhaps to give them a psychological break after their European disappointment. It was a risk, but the second string stepped up and delivered when called upon. Now, it’s time for Sevilla to recalibrate and move forward into the rest of the season.

“It’s a very positive result in a complicated place where we haven’t won much in recent years,” Lopetegui said post-match in comments carried by Marca. “Only we know the week that we’ve had – the elimination, the injuries, the accumulated fatigue.

“They’ve been preparing for the game all week and we’ve played with a lot of heart. We’ve been able to score and they haven’t, but that’s also happened the other way around in other games and they scored against us. We had more control in the second half and we managed to earn three very important points for the players. They deserve it.”