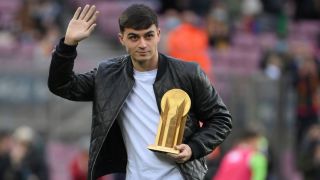 Barcelona midfielder Pedri has been named Tuttosport’s 19th Golden Boy, an award given to the best player in the world under the age of 21. Erling Haaland won it last year. The 19-year-old from the Canary Islands obtained 24 votes out of 40 according to a report in Diario AS, an unprecedented success.

Pedri broke into Barcelona’s first team at the beginning of last season, just after joining the Catalan club from Las Palmas. He was actually supposed to go out on loan for the season, but when Ronald Koeman saw him during a training session he resolved that the midfielder had to join his first team.

He was pivotal to Barcelona’s Copa del Rey success and ended up playing 37 games in La Liga as they finished third, only missing the last game of the season because he had been given time off ahead of Euro 2020. There, at the heart of Luis Enrique’s midfield, he was unplayable as La Roja made it to the semi-final only to lose to eventual winners Italy. He’s injured at the moment.

Pedri was asked by Tuttosport who he thinks could succeed him as the next Golden Boy. “I like [Jude] Bellingham, perhaps because his role is similar to mine, but also because of his style and his personality. I hope to play against him sometime to ask him for his shirt. I already have many: [Lionel] Messi, Cristiano [Ronaldo], [Luka] Modric, [Kylian] Mbappe…”

The teenager also touched on his relationship with Messi. “Playing with him was a dream,” he said. “I was three years old when he won the Golden Boy. He will always be a legend for Barcelona fans, and for me it’s an honour to have received his advice.

“What young player wouldn’t like to have [received his advice]? A monster like him? He congratulated me and told me to never give up. If someone like him tells you that, what can you do at 17, remembering that until a few weeks ago you were only using Messi on the PlayStation? Only one thing – obey. And here I am.”